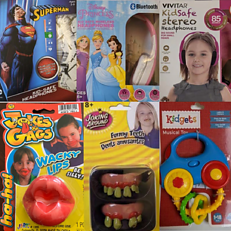 A 2022 product screening report released by the Campaign for Healthier Solutions and Ecology Center found that over 50% of items purchased at major dollar stores in 2021 contained chemicals of concern. Notably, many of these items included toys and other products marketed to children that were found to contain lead, PVC and phthalates. 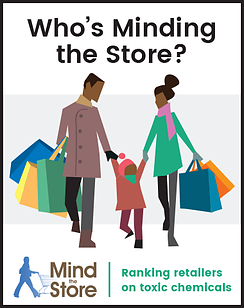 The Retailer Report Card is a report by the Mind the Store Campaign that addresses major U.S. retailers and their actions to eliminate toxic chemicals

2021: Discount retailers won the "most improved" retail sector overall- but not everyone made progress.

Dollar Tree improved from a D+ to a C+ for successfully eliminating 17 priority chemicals from its private-label products- but it still needs to publicly disclose its alternatives, so we know they are safe. And we're watching to make sure they follow through on eliminating and safely replacing all per- and polyfluoroalkyl substances (PFAS), toxic flame retardants, and phthalates in the products they sell.

Dollar General earned a C- grade, making progress from its D grade in 2019. The company committed to eliminating 8 chemicals from Dollar General’s private-label formulated products in the home cleaning and beauty & personal care categories by December 2022. But the company has not yet signed onto the Chemical Footprint Project, and has a long way to go in eliminating PFAS, toxic flame retardants, phthalates, and plastics of environmental concern from its products and packaging.

99 Cents Only Stores received another F with 0 points, for the fourth year in a row.

2017: This was the first year the Campaign for Healthier Solutions participated in the Retailer Report Card. Dollar Tree earned a D+ with 27 out of 135 points. Dollar General received an F with 0 points. 99 Cents Only was not graded in 2017. 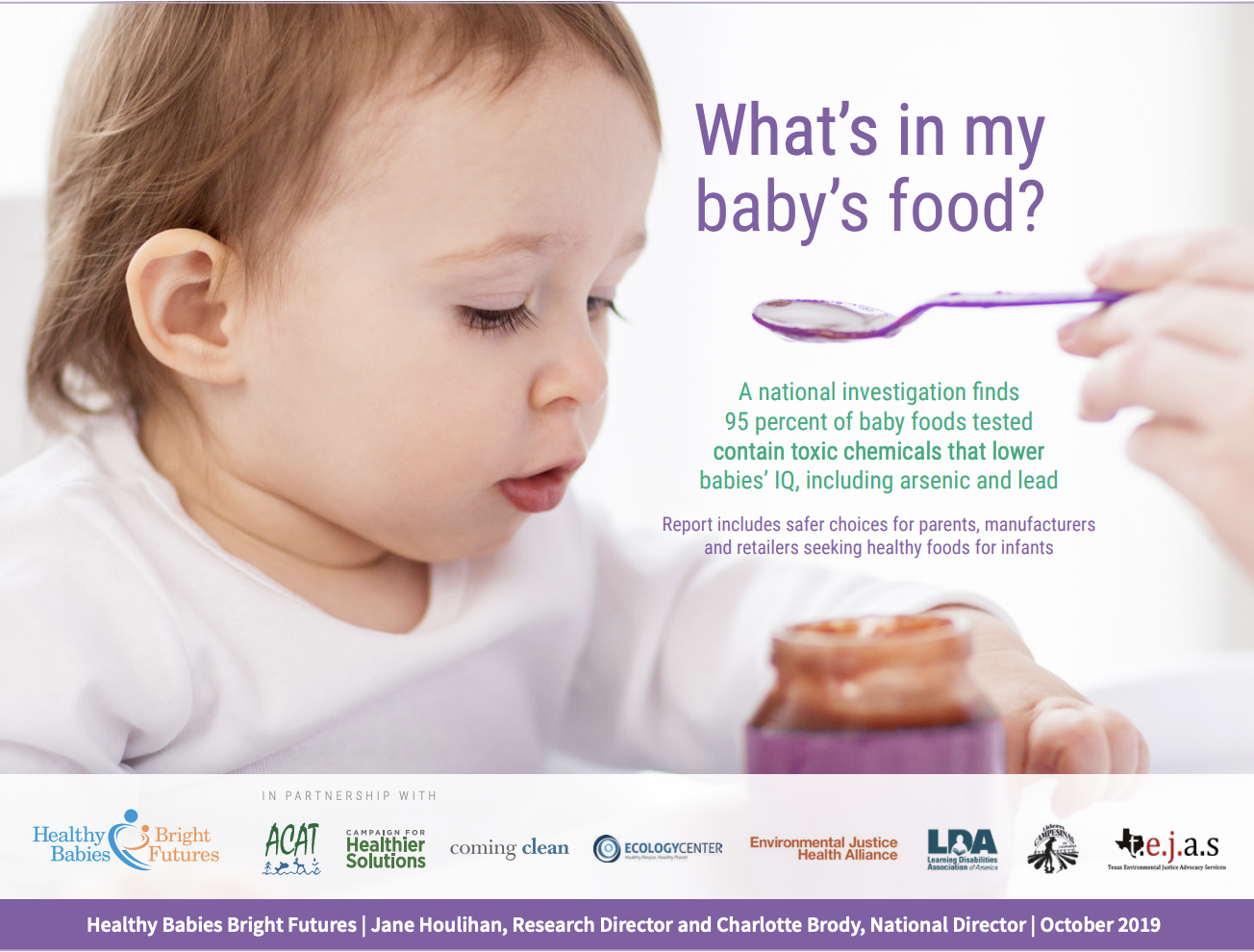 Lowering the Levels: A Healthy Baby Food Initiative
Read: What's in My Baby's Food? Our report on packaged baby food from various brands and retailers  found that 95% of tested products contained at least 1 heavy metal that are linked to lower IQs. 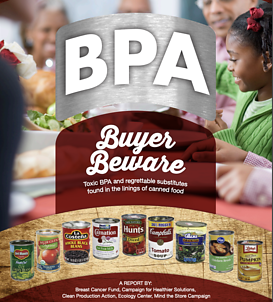 Read: Toxic BPA and regrettable substitutes found in the linings of canned food. Bisphenol A (BPA) is a toxic, endocrine-disrupting chemical that negatively impacts our hormonal systems, contributing to a host of harmful health effects. Hundreds of scientific studies have linked extremely small amounts of BPA, measured in parts per billion and even parts per trillion, to an increased risk of breast and prostate cancer, infertility, type-2 diabetes, obesity, asthma, and behavioral changes including attention deficit disorder. In this report, canned food from national food brands was collected in 19 states for testing. 67 percent of the cans tested (129 out of 192) contained BPA-based epoxy in the body and/or the lid.

A Day Late and a Dollar Short

Read: Discount Retailers Are Falling Behind on Safer Chemicals. In 2015, we tested 164 products purchased at the four largest dollar store chains (Dollar General, Dollar Tree, Family Dollar, and 99 Cents Only) in six states. 81% of the products tested (133 of 164) contained at least one hazardous chemical above levels of concern, including lead and other hazardous metals, phthalates, and polyvinyl chloride plastic (PVC or vinyl).  Low-income communities and communities of color rely on dollar stores for staples, and are already disproportionately exposed to harmful chemicals. We argue that this places a higher level of responsibility on dollar stores to ensure they are not selling toxic products.

Browse the dollar store products that contained chemicals of concern.

Many major brands of popcorn contain per/polyfluoroalkyl substance (PFAS) in their linings. Learn how to make your own non-toxic popcorn at home, by watching this great video from the Center for Environmental Health!

In the seven years since the Campaign for Healthier Solutions published their initial report on toxic chemicals in dollar store products, Bravo has seen “light years” worth of progress in addressing the issue. While 53 percent of products tested still contained chemicals of concern in 2022, that number was 80 percent of 164 products tested in 2015. Further, when the campaign has gone back and tested items that previously tested positive for lead, they have found that they tested negative the second time.“They are not going to claim that it was us,” Bravo said, “we’ll claim that it was us.”

The cost of toxic products? Just $1

Discount retailers often promise shoppers they can buy household necessities for under a dollar, but too often there’s a toxic price to pay, according to a report released last week. More than 225 products — from baby toys to microwave popcorn to non-stick cookware — purchased from so-called “dollar stores” in 2021 were tested for adverse chemicals. Researchers with the Campaign for Healthier Solutions and the Ecology Center’s Healthy Stuff Lab found chemicals of concern in more than half of them. Since 2015, the Campaign for Healthier Solutions has been testing dollar store wares for chemicals like lead, which can damage children’s brains and harm their growth and development, and phthalates, which are endocrine-disruptors that can harm reproductive and cognitive development and have been linked to higher rates of childhood cancer. Read More

Products sold at dollar stores may be inexpensive, but a new report from the Campaign for Healthier Solutions also found high rates of toxic chemicals in the budget brands, raising questions of environmental justice. The consumer advocacy group purchased 226 products from Dollar Tree, Family Dollar, Dollar General, Five Below and 99 Cents Only Stores in seven states and Ontario, Canada, and tested a total of 635 product components for toxic metals and endocrine-disrupting chemicals like flame retardants, bisphenol A and its substitutes, phthalates and PFAS, also known as per- and polyfluoroalkyl substances.The results showed that half of the items had one or more chemicals of concern.“Many families rely on dollar stores for affordable toys and other products for kids,” said José Bravo, national coordinator of the Campaign for Healthier Solutions. “With their high profit margins, dollar stores must do more to ensure that all of these products are safe.” One of the more surprising products where tests revealed the presence of toxic chemicals was children’s headphones. Read More

An alarming number of products purchased at US dollar stores, including many children’s toys, contain harmful chemicals, according to a report released today. Researchers tested 226 products purchased at five popular retailers for chemicals, including phthalates and lead, and found that 120, or more than half, had at least one chemical of concern. Among the products that tested positive were colorful baby toys and Disney-themed headphones.“As a parent, I should be able to buy a product without expecting to poison my child,” said Jose Bravo, national coordinator at the Campaign for Healthier Solutions, a coalition that calls on dollar stores to phase out hazardous chemicals from their products. Read More

A new product screening report released today by the Campaign for Healthier Solutions and the Ecology Center Healthy Stuff lab found hazardous chemicals of concern in children’s products sold by the leading dollar store brands in the US. “Many families rely on dollar stores for affordable toys and other products for kids. With their high profit margins, dollar stores must do more to ensure that all of these products are safe,” said José Bravo, National Coordinator of the Campaign for Healthier Solutions. Tests revealed the presence of lead, phthalates, toxic flame retardant chemicals, and polyvinyl chloride (PVC) components in colorfully-labeled children’s products at Dollar Tree, Family Dollar, Dollar General, and Five Below. Lead was found in Disney and Marvel themed kids’ headphones at Five Below and Dollar Tree, a plastic baby toy at Dollar Tree, and 99 Cents Only Stores’ private-label earbuds. Ortho-phthalate plasticizers were found in children’s hair accessories and toys at Five Below. Fake teeth and lips sold at Dollar Tree and Dollar General were found to contain PVC, a dangerous plastic that can leach multiple hazardous chemicals, such as phthalates and heavy metals. Read More